My jie jie is ill. It started with what Missy thought was jie jie retching. Thinking it was a case of indigestion or gas, Missy offered jie jie acidophilus and charcoal in turn. But the ‘retching’ just got worse. Soon, jie jie stopped eating and playing altogether. Missy took jie jie to the vet on Monday and ordered a comprehensive blood test. Everything came out normal and Missy and jie jie went home. But jie jie just got worse and worse. She would ‘retch’ up to 3-4 times an hour. So on Saturday, Missy took jie jie to the vet again. This time, the vet heard jie jie. It turned out jie jie hadn’t been retching at all, she was coughing! The X-ray showed that jie jie’s lungs are amassed with fluids and possibly blood and pus too. The vet said jie jie’s condition is serious.

Jie jie is now on antibiotics and a diuretic to drain the fluids off her lungs. The folks are keeping her very quiet by restricting her to her recovery area.

It is now Monday and jie jie has lost control of her bladder about 7 times. Thank God for pee pads!

We are all very sad and worried at home. Jie jie is still doing poorly. She refuses food and has gone down so much her spine and ribs are showing. Jie jie, always a little on the tubby side, has never looked like this before. 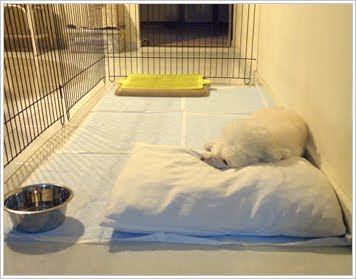 Jie jie in her recovery area.

If anyone has any idea how to make my jie jie eat, or more comfortable, or get better, please let my Missy know.