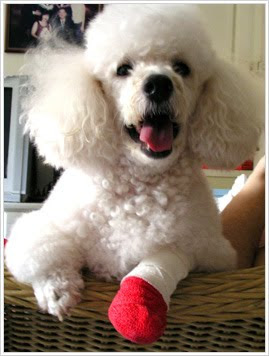 This photo is from another health scare previously when jie jie had a huge growth on her paw-paw, most likely from an insect bite. It was disturbing her so much that she couldn't sleep. Upon closer inspection, Grandmama and Missy discovered the swell. It was in the middle of the night so nothing could be done then. The next day, as soon as the clinic was opened, Missy rushed jie jie to the vet.
Oh jie jie, have you been bad? Does that mean no Christmas pressie for you this year?
Posted by Waverly at 9:31 pm