After five long years of planning but never getting to updating my jie jie's website, Missy finally decided to just start afresh with a new blog! It’s toughie for Missy to do anything because she’s such a perfectionist!

Anyhoo, here I am! Helloooo, World!

My name is Waverly, really Waverly Daffodils Leigh. Ain't it a pretty name? I'm a Hillani Poodle. I'm cute as a button. I'll soon turn two but Missy thinks I'm still such a baby. I suppose I have what people call a baby face. Look at me! 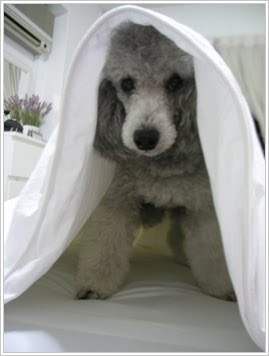 That's me monkeying around on Missy's bed!
I have a jie jie*. Her name is Daisy, really Daisy La Plus Jolie, which means Daisy the Beautiful. Fancy eh, she's got a title and everything. She's quite the ice princess, my jie jie. She's got loads of attitude and airs, very uppity and queenly. But oh, how she mesmerises. Just one look from her and everyone's ready to swoon at her paws! That's my jie jie for you. I love her, though, for despite being the queen she is, she indulges me most times, lets me have her toys, lets me take over her favourite beauty nap spots and lets me poke my nose in her food! 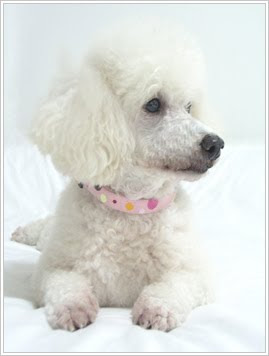 Here's jie jie looking pretty in her brand new
custom-made collar, a gift from Auntie A.
Doesn't she look ethereal?

Okies, I gotta sign off now. Missy and I will be updating this site more over the next few days so watch this space!

Missy's Extra: 'Jie jie' stands for '姐姐', which is Chinese for 'elder sister'.